Twin Gear: What You’ll Need If You’re Having Two

One of my favorite things about being a twin mom is connecting with other twin moms….and even better, twin moms to be! I recently heard from three (THREE!) of my friends who just learned they were having twins.  They were excited, but understandably nervous.  And one of the first questions they all asked me was: “What gear do I NEED to have with twins??”.

It’s overwhelming preparing to bring a new baby home – how many burp cloths do I need? Should I get a diaper pail for upstairs and downstairs? Same for a changing table, do I need two? But add in the additional complicating element of a second baby….and it’s a whole new ball game.

But rest assured, you don’t need two of everything.  And in fact, much like having one newborn at home – you don’t need a ton to keep them alive.  But here is a list of items that we relied heavily on with twins.  Some of these things we got two of (it’s noted which we did buy).  AND there’s even an item I wish I had known about….

So when you’re ready to start nesting for your twin parent days….give this a look and happy shopping!

Disclaimer: Please note that there are affiliate links on this page and I will earn a small commission if you purchase through those links. However, all opinions are my own. Thank you for your support.

Fisher Price Rock n Play – We started with one Rock n Play, but during one sleepless night while struggling to soothe both twins who wanted to sleep anywhere but their crib….I ordered a second one and paid the rush shipping to get it delivered next day.  And after that, life was good.  In case that wasn’t clear – I recommend getting not one, but TWO Rock n Plays.  Feeling sticker shock? You’ll save a few dollars if you spring for two of the regular vs two of the auto-rock versions.  We didn’t have the auto-rock version, just the vibrating chair which was enough for us!

Twingo – Hands down my number one recommendation to a twin parent is: GET A TWINGO.  When we lived in the city i coudln’t always take the stroller everywhere, so double baby wearing wasa lifesaver. The Twingo is really well designed so I promise it’s quite comfortable (and my twins are 30+lbs each!).  I got mine when the twins were 10 months old and I wish I had done it sooner.  But I’ve gotten a ton of miles out of mine – L&H are 2 and I still use it! A huge bonus is that the Twingo separates into two separate carriers so you and your partner (or caregiver, grandparent, friend, whoever) can each wear one child on your front OR back.  It is like having several types of carriers in one. 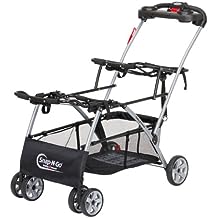 Double Snap n Go – In the early days, our Double Snap n Go was a lifesaver on trips that required the car.  It was so easy to just pop the car seats out of the car and into the snap n go. It made several double sleeping baby transfers possible and that in my book gets an automatic recommendation! 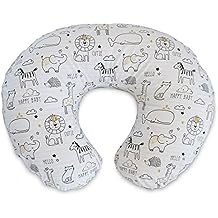 Boppy Pillows – I refer to our boppy pillows as our spare set of hands – and I mean that whole heartily.  I recommend getting two boppy pillows over (or in addition to) a twin nursing pillow.  (Actually, we had four total – two upstairs and two downstairs.) Our twins fed, napped, played – everything in Boppy Pillows for the first few months. We used them well past the newborn stage as well. I’d prop L&H up in them for tummy time or even upright once they were able to sit up – it was a great way to play with both of them at the same time. 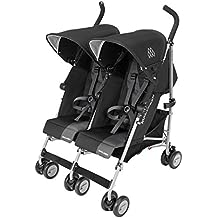 MacLaren Twin Triumph Umbrella Stroller – We have many double stroller options (I could, and should do a whole post on just that….), but the Maclaren is hands down the lightest, and easiest to travel with. It fits in the back of the car no problem, it’s been on and off planes with us, and it’s our favorite option to take into restaurants since we can fold it up and stash it by the table or in the coat room.  It also has six sets of wheels (two in the middle) so there is no sagging – and our twins are getting big!

Baby Connect – This is app kept me sane during the early months with my twins.  It helped us keep track of feedings and diaper changes….which doesn’t seem that tough, but when you’re sleep deprived and have two infants to keep tabs on it’s helpful to have all the information recorded somewhere.  Especially because when you go to the doctor they’re going to ask you questions like “how many wet diapers?” and “how many times is each baby eating per day? for how long each time?” and you will stare at them blankly unless you have it recorded somewhere.

Little Loop Carseat Carrier – I wish, wish, WISH I had known about this when L&H were still in their infant car seats because while there are so many wonderful parts of twin parenthood….I’m not going to lie to you, one of the worst parts its carrier two carseats at one time.  Those suckers are HEAVY to start with, and when you add a growing baby to them it feels like you’re carrying several cinderblocks (times two) in the most awkward position ever.  These Little Loops look like a lifesaver! I haven’t been able to find out if these ship to the US yet – but if they do BUY TWO. 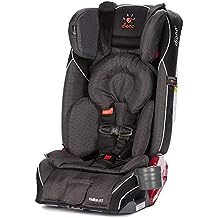 Diono Radian RXT All In One – It probably goes without saying, you need two carseats if you’re having twins.  Duh.  We had the Chicco Keyfit Carseats for L&H when they were babies, but when they turned one we switched it up to the Diono Radian RXTs.  It is possible to start with these seats right from birth! These seats are very popular among parents of multiples because they fit snuggly next to each other – and should you have or want to have additional children some day, you can fit three across in a standard sized car.  This was music to our ears since we have a Subaru Outback and don’t have plans right away to upgrade to a monster SUV.